Sara Leibovits's youngest daughter was born in 1963 in Bnei Brak. She is a mother of six, a writer, journalist, and playwright. She holds a B.A. In Geography and an M.A. In Hebrew literature. In the past she was a tour guide, and later she worked as a journalist and editor for "Makor Rishon" newspaper. Eti directs writing workshops and gives literary sessions to children and adults. She has written a number of books, among them the successful children's fantasy series "Enchanted Mother," the fantasy trilogy "Illusion", the historical novel "Orchids in Sha'ar Hagay", and the feminist-religious novel "Regards to Heaven". Her plays have been successful too and are shown in many schools and communities. As a second-generation Holocaust survivor, she completed a "Memorial Envoys" course from the Shem Olam Institute and became an advocate of her mother's story.

Why did we like it? The book is narrated in two voices – Sara's leading voice, which tells of her survival in Auschwitz-Birkenau with courage, faith and kindness to others, and the secondary voice of her daughter Eti, who completes her mother's story, seventy years later. Together, the two voices create the fabric of survival, heroism, and memory. 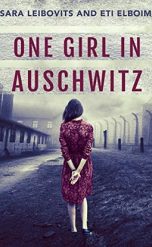