Yoram Eshet is the bestselling author of A Soldier Returns Home, winner of the Yitzhak Sadeh Award and a Sapphire Award nominee. Eshet is a professor of Geology as well as Learning Sciences and also holds a bachelor’s degree in Archeology. Throughout his career as a scientist Yoram published more than a hundred books and scientific articles, which received important recognition such as the Freund Award for Geological Research and the Distinguished Scholar Award for his studies in Learning Science. For two decades he was a senior researcher at the Geological Survey of Israel and a scientist at a computer company.

Born in 1950 in Kibbutz Urim in Israel, Yoram is a veteran IDF Paratrooper.

His newly-published book, Tamar’s Labor deals with women’s grief over the death of their children. Just like A Soldier Returns Home, Tamar’s Labor examines human behavior after tragic personal loss and severe disasters and trauma. 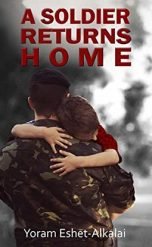