Noga Niv is a clinical psychologist in private practice in Palo Alto California www.noganiv.com . She moved to California in 1991. Noga is a mother of two adult children, one living in San Francisco and the other in Tel Aviv; she is married to a high-tech executive in the Silicon Valley. This book, “Inside the Bubble”, is Noga’s first novel. It was written in Hebrew and published in Israel in 2008. The novel was recently translated to English and published by Inkshares in May 2015.

This fiction novel is based on Noga’s experience as an immigrant to the Silicon Valley at the turn of the millennium. It is a story about five (Israeli) women who followed their husbands to the heart of the Silicon Valley. They found themselves living far from their homeland and relating to each other as members of their new extended family. They grapple with issues of adjusting to a foreign culture, the loss of their potential careers, the question of raising their children with an identity different than their own identity, guilt feelings, and with issues related to their marriages to hard working high-tech entrepreneur husbands.

The story of these women and their husbands reveals the life of the new kind of immigrants, the “high Tech immigrants” that are attracted to the Valley to fulfill their aspirations and passion to change the world. Inside the Bubble describes the backdrop of the fascinating life of this special valley, the place we live in, as “the human face of high-tech” (Richard Almond, MD). 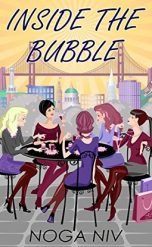