Clinical psychologist, Orit Zeevi Yogev, has treated hundreds of adults, teenagers, and children who suffer from morbid obesity. She established a hotline for those experiencing mental distress related to obesity, which provides a response to children and parents throughout Israel and even outside of it. Leave me Alone was written in part to express the pain of those for whom the world refuses to see past their weight.

Due to her achievements in the treatment of obesity and at-risk pregnancy, she was ranked in 2004 by a leading newspaper as one of the ten best psychologists in Israel.

Yogev is currently a consultant to medical organizations in all matters related to bariatric surgery and obesity and also manages an internet community with thousands of members designed for people suffering from depression and anxiety.

At the same time, she makes an effort to appear regularly in the various media in Israel in an effort to effect real change in the way people understand the phenomenon of obesity and the way it is treated. 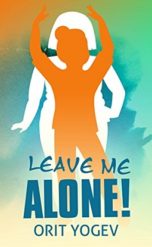