Motti Ben Yanay is an Israeli journalist and author.

He was born in Hungary in 1940 and survived the Holocaust as a child, arriving in Israel with his parents in 1948.

As an adult, he lived for a few years on a Kibbutz, later becoming the editor of an economic journal and working as a journalist for Associated Press in Israel as well as the Jerusalem Post.

He studied history and philosophy at Ben-Gurion University.

This is his fourth book. Three of his other books have been published in Israel in Hebrew:

Secrets of the Canaa-idim – Science fiction for young adults. Published by "Masada", 1980.

Other of his short stories have also been published in various journals. 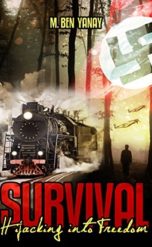