While still a high school student, his passion for writing and literature had awakened. He would often cut classes and run away to the city library, to investigate and search for the names and people who had planted in him the dream of becoming a writer, serving as models of defiance of the norms in the acceptable academic frameworks. When he finished his military service, he traveled across Europe and began to learn language editing and to write short stories on his own. He believed that writing stemmed out of passion, experience, imagination, and observation, and therefore chose not to study writing formally. He realized at the time that he was destined to write, to shout out the fates of all those who held their tongues. At the age of twenty-four he published his first novel This Is How The Story Begins 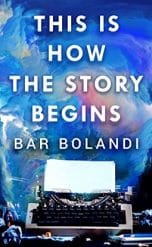