His expressive blue eyes full of warmth were the secret weapon of Abraham Levy and another secret he had kept in his heart for years.

In 1937 he immigrated to Palestine with part of his family and stayed there for a year and a half. As an eight year old child, he ran on the golden sands of Tel-Aviv and became an Israeli in whose blood, flowed the legend of the ancient hero Bar-Cochba.

The cruelty of destiny took him back to Europe right before the war against his will. All the rest of his family, who had tasted the taste of Paradise in Palestine, was murdered in the ghetto and Abraham went through the Inferno of 6 concentration camps at the age of 12: R.A.B. Lager, Auschwitz-Birkenau, Buna, Dora, Nord-Hausen and Bergen-Belzen.

He received the power to overcome all tribulations from the sun, the sea breeze and the streets of Tel-Aviv, from his friends in 'Tachkemoni School' and the words he repeated to himself over and over again: 'I am as brave as an Israeli soldier, I am a fighter and I will never surrender. I am like Bar-Kochvah, I look the lion in the eyes and defeat him. I am from Palestine and I am strong!'

From the moment when he was torn from his mother's arms in the Zychlin Ghetto until he reached the coast of The Holy Land once more, he passed a journey full of obstacles but he founded a glorious family. 'Only here everything belongs to us, the blue sea, the sky, the mountains, the oranges and the clean air. Here is the land where Elijah the Prophet went up to Heaven and Bar-Kochvah rode the lion.' 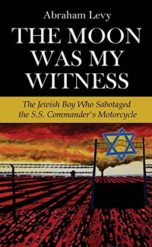