Israeli media was stunned when Tom Wegner, a well-known strategist and political campaigner who served in positions such as the prime minister's spokesman as well as the defense minister's communications adviser, became the voice of medical cannabis patients. The dramatic turn of events in Wegner's life occurred after his father was diagnosed with cancer and needed medical cannabis treatment but encountered bureaucratic difficulties that prevented him from obtaining the much-needed treatment. In an attempt to help his father, Tom met extraordinary people, whom he calls the "underground of angels," who dedicate their lives to helping critically ill patients in need of cannabis, under threat of imprisonment and institutional harassment.

In 2019, Wegner began posting a series of interviews with medical cannabis therapists and patients on social media, which shocked many opinion leaders in Israel and revealed an acute human rights crisis, which took place away from the public's eye. Wegner's first book, Cannabis Wars, incorporates some of this important evidence into a staggering document.

Wegner is also known as an Internet entrepreneur and activist, one of the founders of the Israeli Space Association and of the Trees Fund. 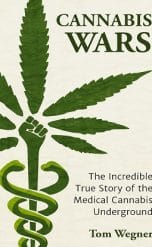