George Shefi was born in Berlin in 1931. For the first years of his life he grew up in a loving and protective family. After Kristallnacht, when he was seven years old, his mother managed to send him to England with the Kindertransport, which saved his life. He never saw her again; she was murdered in Auschwitz in 1942. As a little boy he became a refugee, moving from family to family and from country to country, until he made his way to his home in Israel. Through all of this he did not lose his hope, his optimism, and his love of life.

Shefi now lives with his loving family in Israel. He is very active in sharing his story and his world view with others, mostly young people. He frequently meets with educators and school children in Germany and in Israel. On January 27, 2014, International Holocaust Memorial Day, Shefi was invited to speak before the Saarland Landestag in Germany. His optimism and sense of humor make him an extremely popular story teller. Both are reflected very powerfully in his book. 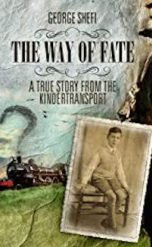