Samuel Refaely spent most of his adult life working in computers, leading a rational and reasonable life, filled with society and public activity, and even served as deputy mayor. Then, when he was 63, his love passed away and a month later, came back to visit him.

She did not come in the form of a dream or a night vision, but appeared when he was fully alert and changed his life. Two paths stood before him – cataloguing the event as a freak occurrence brought on by grief, or deciding to think and investigate. As he had done his whole life, he chose to search, study, and learn, and did not stop even when his family raised their eyebrows, some with genuine concern.

Samuel quickly discovered a wonderful and challenging world. He studied methods of energy healing and body-and-soul therapy, and opened his world to communication with higher guidance which provided him with knowledge and wisdom and made him feel as though someone was leading him along the paths of worlds he’d never known before.

He dedicated his first book, “Gone Back in Time, I’ll Be Back Soon”, to the dramatic change he experienced. A change that was accompanied by many torments and difficult questions, which he brings to light in the pages of his book, together with the answers he found and “was given”.

Once he had found peace and was confident with his path, he began to research the afterlife itself. “What is there” was the question that did not let him rest. Other thoughts like what is it that prevents us from “seeing” them clearly became his best friends, and he slowly gained an understanding. He studied hard and mainly through tapping into his higher guides, was able to write his second book – “A Tale of a Soul”.

Samuel Refaely is 71, has three children and six grandchildren, and is currently in a happy and loving relationship. 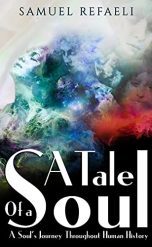