Shmuel Peretz was vice president for finance at Israel Aerospace Industries [IAI] and also served as president of IAI Europe in Paris, France. Immediately upon retiring he began his new career as a writer and so far has published five novels dealing mostly with Israeli life. The Carpet Weaver 0f Isfahan is his first work as a suspense writer, describing a human dilemma that forces two enemies such as Israel and Iran to cooperate in order to save the day. Peretz is married and has three children. He currently lives in Rehovot, Israel. 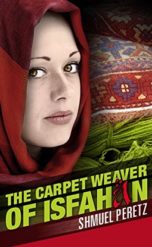