An attaché at the Israeli Embassy in Paris in the 70's, he participated in the Yom Kippur War, took up residence in France and directed marketing for Europe's largest manufacturer of child safety seats. His expertise led him to represent Israel at several European summits and committees within the ISO and the UN-EEC.

At the turn of the millennium, Shlomi expanded his horizons, delving into Kabbalah, Tantra and eastern philosophy.

Shlomi published his first book, "The Army of Thorns" in 2011. The book received overwhelmingly positive reviews from readers.

In "No Medals Today", Shlomi has taken true and otherwise dry historical facts and created a vibrant page-turner.

Shlomi has two sons, six grandchildren and has been married to Daphna since 1966. 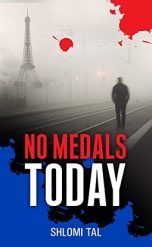