Shalom (Shuli) Dichter is an Israeli educator and social entrepreneur, as well as a pioneer in the struggle for an equal, shared society for Jews and Arabs in Israel. He is the co-founder and co-director of the “NISAN” (the month of spring, both in Arabic and in Hebrew) center for research on shared society at the Van Leer Jerusalem Institute; former CEO of the “Hand in Hand” network of bilingual Jewish-Arab schools; and former co-CEO of “Sikkuy,” a leading advocacy group for equality in Israel. Dichter also served as a consultant to the Israeli Minister of Minority Affairs during 2009-2010.

Dichter’s articles and professional commentaries on Jewish-Arab relations in Israel have been published by leading Israeli papers, including Haaretz, Maariv, as well as The Jewish Week. He lives with his family in Kibbutz Ma’anit. 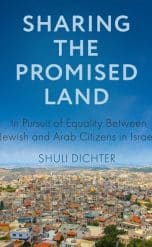