Ruvik Rosenthal is a well known Israeli writer and linguist. He has published 24 books on various topics, as well as hundreds of articles, essays and journalistic features. He is known for his linguistic writing for which he has won the prestigious Sokolov Award. For his best-selling children's books, he has won the Ramat-Gan Prize for Children's Literature. Over the years in his books and articles Rosenthal deals with the core-issues affecting Israel: wars, bereavement, social conflicts and the cultural and ethnic diversity of Israeli society.

Rosenthal has been praised for his rich, flowing style and his profound insights to the human condition. His website The Language Arena on www.ruvik.co.il, offers his ongoing writing endeavors open and free to the public. 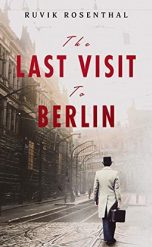