Keren Boyko is 43 years old and has a daughter, Omer, who is three. She owns the publishing house “Mirkam” and holds a B.A in Economics and an M.A in Philosophy of Science.

Keren felt that she was well prepared for her daughter’s birth – she attended birthing classes, read books, and consulted with the people around her and with the doula who accompanied her. But after she gave birth, she felt as though there was a big secret that had been kept from her.

“I think that if I had known what I was getting into, I could have prepared properly and saved myself a lot of needless suffering. I was not aware of some fundamental things about giving birth and the first few months of motherhood. This ignorance sabotaged my birth and the following months, but now I know how much better they could have been if only I had known.” 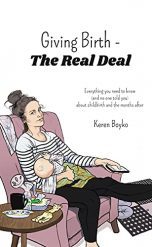