Zvika Amit, began his career as a reporter and commentator for the Israel's largest newspaper, "Yediot Aharonot" and the for the national radio station "Voice of Israel".

Over the years, he held various senior positions as CEO and Chairman of leading companies and organizations. At the same time he also served in several important positions in the public sector. This position was created for him familiarity with decision-making processes in the Israeli system

The book "Code Blue", which is based on a deep understanding of the political system, became a bestseller and created many comments in all parts of the Israeli society. 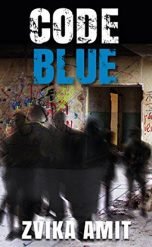