Amos Talshir was born in 1950, at Kibbutz Ma'ale HaHamisha in Israel, and grew up in Beer Sheva. After his military service, he studied film and communications at the Tel Aviv University. Upon obtaining his degree in 1977, he published his first book, Like Dogs Bound Together. His second book, Little Believer, was released in 1978.

During his thirty years of working in the advertising world, Amos led a group of media and communication companies under his ownership and in partnership with the international media giant Publicis. As the CEO of the company in Israel Amos was a pioneer in interactive media internet advertising, then went on to build a network of communications companies in Israel. When he left the industry in 2007, he finally found time for his first loves: writing and carpentry.

In 2008, his third book, God Loves Me, was published and since then, Talshir has published six more books (Wounded Lion, Tarzan Will Suddenly Appear, Provincial, Provincial Poems, Sudden Game, Romance in Black and White).

In the last two years Amos Talshir has returned to academia, receiving a master's degree in Education and Society. 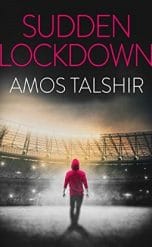