Nir Zamir had served in the Israeli army's Special Forces and Anti-Terrorist units as well as in the Israeli Secret Service. Killing Rituals is his first novel, following the earlier publication of 'War Horse', a short non-fiction story about the 1982 Lebanon war, published by The North American Review in 1991. An avid martial artist he is a volunteer at Budo for Peace, a not-for-profit organization set up to foster reconciliation & coexistence between Arab and Jewish youth. He lives in Israel with his wife, three children, and a female Akita named Chinto. 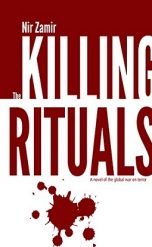