Anthropologist Nahum Megged, one of the most prominent researchers of ancient civilizations on the American continents, has published numerous books, including some bestsellers, about indigenous cultural heritage, including Aztec rituals, Native American mythology, pre-Columbian civilizations, shamanism, magic, and witchcraft.

He grew up reading as many books as possible that took him to a different, more exciting world. He also wrote endlessly, mainly poetry, with his poems published in local newspapers and weekly magazines.

Nahum lived in Colombia with his wife for two years, where he established an interfaith dialogue center, completed his multidisciplinary religious studies, and immersed himself in the world of primordial beliefs. He embarked on anthropological expeditions to the forests and villages, where he studied shamanism and the religions connecting man and nature. He was also an activist, promoting the rights of indigenous tribes. The Mayan shamans told him that he is an incarnation of one of them, despite his white appearance.

The Mexican government awarded Nahum the Order of the Aztec Eagle, and the Guatemalan government appointed him an honorary cultural attaché. When Time Is Cracked and the Trees Cry is a novel that combines the author's intimate knowledge of contemporary American indigenous cultures with a surprisingly powerful literary imagination. 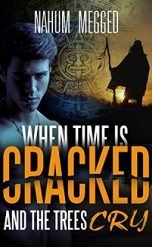