Nurit Sahar Sudai devoted twenty years to writing her first book. During this time, she managed to get married and have two children, establish a performing arts school, study music and musical production for six years, play the guitar and a bit of piano, learn Indian dancing, fall in love with Spanish music and become a flamenco dancer.

This array of talents has made her the life and soul of the party during family gatherings and holidays. One can only assume that were this a different century, she’d have ended up as the court jester.

She took her high school history teacher’s words very seriously when he’d said, “A good writer only writes one book.” Since that’s the case, she wrote three drafts for her book – along with an entire treasure chest of plot strategies and plans.

While holding her book hostage, Nurit scored music for a few of its scenes, thus giving birth to the project’s musical album. She now owns a big vintage clothes shop, a blue pergola with a Louie bathtub in her yard, and she’s generally very happy and has nothing to complain about. 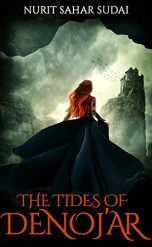