Moshe Levin (Born 1962) is a former IDF intelligence officer, the owner of one of the leading engineering geological consulting companies in Israel, and a lecturer in international conferences on rock mechanics, water storage, and hydropower. His past military service, current professional work, and the future development of sustainable agriculture all express his curiosity to understand the earth, and how humans have treated it along history by manipulating geography, religion, philosophy, and science – to fit their needs.

Levin, Like many 2nd generation holocaust survivors, was raised to believe in peace and the value of human rights. He experienced violence and war as a young soldier during the siege of Beirut in 1982, and later in the siege around the Church of the Nativity at Bethlehem in 2002. In his writing, Levin creates an extraordinary puzzle by combining his ideas with other texts, from the bible, novels, and poems to form a universal human experience of belief in peace while knowing its fragility. 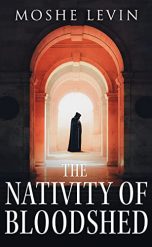