Mordechai Teicher has been an independent inventor for three decades and is named on over 70 US patents in a variety of fields, ranging from electronic display and syringe safety through micropayment, automated retail, memory devices, navigation and social networking, to mobile dialing and automation architectures. From the outset of his career, Mr. Teicher has been drafting his own patent applications, in many of which he has also represented himself before the United States Patent and Trademark Office.

Having founded four startups, Mr. Teicher has closely experienced the business aspects of patents. As a consultant to a variety of companies in both the lo-tech and hi-tech sectors, he has gained rich experience in coaching inventors and mentoring mangers throughout innovation and patenting. 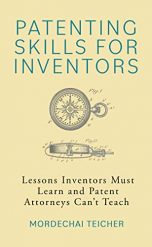