Ishai was born in Israel in 1949, after his adventurous father moved there, along with his mother and sister, in an effort to take part in the historic experience of the foundation of the new State. Nevertheless, Ishai's father did not succeed in adapting to the hardships of life in the fledgling country, and they soon found themselves back in Germany, a hub for refugees and displaced persons. The family's troubles, complete with its eventual breakdown, serve as a faithful illustration of the times, when Europe, reeling from the horrors of WWII, was still trying to find itself. Ishai's childhood was fraught with woes. He often found himself without any parental supervision for long periods, left to the mercy of occasional strangers in whose homes he would temporarily stay. Ishai even lived in a Christian orphanage until his mother succeeded, quite miraculously, in securing his release and taking him and his siblings with her to Israel. They soon discovered, like hundreds of thousands of other Jews, that Israel is their rod and staff, the guarantee of their security and that of Jews worldwide.

The culture shock Ishai experienced on arrival in Israel gave rise to a rich fantasy world through which he observed his own life and caused great difficulty in choosing the right path. Nevertheless, his crowning achievement has been the family he established, a value about which he never wavered. The tragic death of his beloved wife, the love of his life, cast a terrible cloud over this family dream, but Ishai's children shielded him, and he found his happiness among them.

Ishai has been living in Israel since 1960. He has three children of whom he is immensely proud. 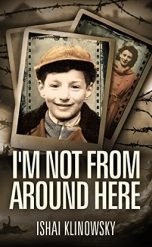