Yitzhak Bar Yossef was born in Tel Aviv in 1949. He holds degrees in Jewish history and theatre studies from the Hebrew University in Jerusalem, and also has a qualification in comparative literature. For 25 years, he was a journalist and member of Yediot Aharonot, the most popular newspaper in Israel.

He has published ten books with Israel’s biggest publishing houses and has won many literary prizes – including the Prime Minister’s prize for Hebrew writers, twice (in 2011 and 2003). His book, The Son He Left Behind ( Mazkeret Ahava in Hebrew edition) , is a bestseller and garnered enthusiastic reviews. It has been translated into Czech and Serbian and published in Prague, Belgrade, and Montenegro, with great success. His stories have been translated to many languages. 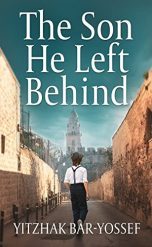