Y. G. Levimor is a pseudonym for Yasmine Levi and Gal Mor, two journalists, web personalities and writers who have experienced events in their own lives that sparked the ideas expressed in Netopia. These events are a product of a chaotic reality in which technology both connects and isolates people, making them cold and alienated, but also hungry for a warm, tangible relationship; a reality in which large populations are on the verge of hunger, and are not present online to read about the acquisition of yet another startup. The Netopian world was born of a deep conviction that anything which is granted could also be taken away in a moment, and nothing is more certain than that which is transient.

Yasmine Levi is a media personality and a journalist with the soul of a tortured artist, who fantasizes about life in a world of icebergs and penguin-orca hybrids, and is always missing what she has yet to experience. She is one of the most influential Facebook users in Israel, and is formerly a journalist in Yedioth Ahronoth's flagship weekly supplement, "7 Days." Levi has forged her path from the world of traditional media to online realms, and has become a Deputy Editor in Chief on the media website "Saloona." On her way there, she accumulated tens of thousands of followers on social networks, and personally experienced the "weak-strong" relationship with hundreds of people every week whom she has never met, but who treat her as a familiar presence in their lives. She has also experienced, at least once, a situation in which she nearly lost all her followers, friends and content on Facebook due to a technical glitch, and realized the immense emotional value of our online lives, as well as how easily they could be taken away.

Gal Mor is the owner of the popular Hebrew news site "Holes in the Net," which hundreds of thousands of Israelis visit every month. Mor is a former head technology writer for the popular Israeli news site ynet, and had been connected to online networks since the days of BBS. He has been following technology for many years, and writes about online phenomena from a critical perspective. He enjoys being current on every trend and advanced technology, but is also not an early adapter, and won't be found standing in line to buy the new iPad or iPhone.

When "Netopia" was launched in early 2014, it created a buzz among a critical audience of web surfers who live on social networks and identified with every word, viewing the book as a combination of 1984 and "Black Mirror." The novel does not advocate rejecting technology, but acknowledges its importance and inevitability. It is aware of the fact that human evil will not disappear from the world, but will only change medium. This understanding requires an attitude of both respect and caution, less in regard to technology than in regard to the people who shape technology, enjoying an unprecedented influence on the existence of millions of people. The power held by technology companies such as Google or Facebook exceeds that held by most modern superpowers, and is a non-democratic regime in which the fate of the majority is determined by algorithms. We believe the underground revolution in which the rule of countries is replaced with the rule of algorithms will not take place overnight, but is ultimately inevitable. At the end of the day, those who are not connected will find themselves disconnected from life itself. 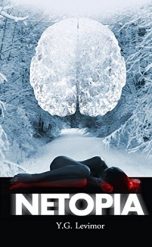