Jonathan Hillinger finished his Bachelor’s and Master’s degree in Biochemistry, while living in Cordoba, Argentina.

Jonathan’s parents – David and Simona Hillinger, were both born in Romania to families that lived through and survived the horrors of the WWII. His grandfather – his mother’s father, served as an officer in the Romanian army. On his father’s side, most of the family was killed at Auschwitz and only his grandfather and great grandfather, made it through alive.

The inspiration for this book came to Hillinger from a street child he encountered in Argentina and many of the descriptions of the city at the time of the war, are based on his mother’s childhood memories.

Jonathan Hillinger’s articles have been published in two of the major newspapers in Israel and three of his short stories won writing competitions (Best short story Ramat Gan writing Competition, 2016 and best short thriller in 2017 by the Yekum Tarbut organization). He is also known for writing historical novels in the magical realism genre. 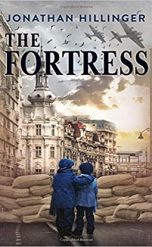