Yehudit Kafri Meiri is a 20th-21st-century Israeli poet and a writer, as well as editor and translator. She was born in 1935 and lived as a child in Kibbutz Ein HaHoresh, where her parents were founding members. Yehudit belonged to the first group of children born in this kibbutz.

After she got married, she moved to Kibbutz Sasa, where she wrote her first book, The Time Will Have Mercy, which was published in 1962, one year after she moved to Kibbutz Shoval with her family. In Kibbutz Shoval she published a few more poetry books and children's books and made her first attempt at writing prose including a book describing her childhood memories, All The Summer We Went Barefoot, which was successful and sold several editions.

Yehudit Kafri, a mother of three and grandmother of five, has lived since 1989 with her husband in Mazkeret Batya, where she continues to write and publish books of poetry and biographies. In 2003 she published a historical biographic novel, Zosha: from the Jezreel Valley to the Red Orchestra, which tells the life story of Zosha Poznanska, who was a member of the Red Orchestra and eventually killed by the Gestapo. This novel won The Best Literary Achievement of the Year Prize in Israel. It has since been translated and published in English, and in Polish, and lately in Amazon.

Kafri published 9 poetry books and 9 others (children's books, biographies, and prose). Poems by Yehudit Kafri were published in Hebrew, Arabic, English, Spanish, Croatian and Russian. Kafri has won several literary prizes including the Prime Minister's prize in 1987, and other prizes. 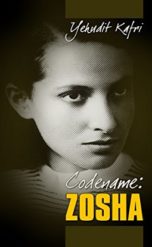