Simon Haim and his twin brother, David, were born in Tel Aviv in 1948 to Holocaust survivor parents.

As children, their parents tried to shield them from the pain and loss they had suffered during World War II. They thought that such stories were not appropriate for children. But their attempts to conceal the past proved unsuccessful. It was clear to the twins that the home they were growing up in was different from the homes of their friends.

As the years went on, the past became clearer. Haim’s father, Shomo, began to recount to his children stories from the forced labor he had endured while Germany carried out its attack on Russia. The stories were gripping, fascinating, and full of danger. Somehow, father Shomo always came out of them on his feet.

The family led a seemingly normal life alongside the harsh memories. Shomo managed a dentistry clinic, David became a professor of dentistry, and Haim studied to become an engineer, eventually selling one of his companies to Microsoft Inc.

But Haim’s real passion was and still is history, particularly the period in history that changed his people’s destiny – World War II.

A Long Way to Auschwitz combines fascinating descriptions from that turbulent time with the incredible and moving stories of Haim’s own father, Shomo. 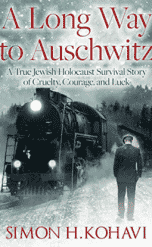