Zali de Toledo was born in Turkey and immigrated to Israel at the age of seventeen on her own, facing hardship and working in menial jobs due to her lack of formal studies.

As an autodidact, today she has mastered six languages, has held important positions such as Manager of the Talma Art Gallery, Public Relations Manager of the Israel Philharmonic Orchestra, Cultural and Inter-religious Affairs Attaché in Turkey, Chairperson of the Association of Turkish Jews in Israel, and more recently, Turkish Media Researcher for the Middle East Media Research Institute, MEMRI.

Zali has a daughter, 3 grandchildren, and one great-grandchild. 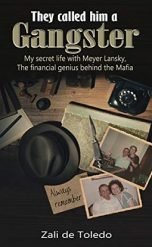