Born in Tel Aviv, 1973, Vered grew up in Raanana and went to Oustrovsky high school. She served in the Air Force as a training instructor.

After graduating from "Koteret" school of media and journalism, Vered gained a BA in social science.

After graduation, she started working as a reporter for the Tel Aviv newspaper before moving on to the "Tapuz" website as a sub editor, and after that a sub editor of Woman's world (Olam Hisha) magazine.

In 2002, she moved to New York as a reporter for Woman's World Magazine.

When she returned to Israel, Vered wrote for the magazines Menta and Atmosphere.

While doing that she was also exposed to the television world due to a number of drama series she wrote and developed. She also started to write a personal column in Timeout kids magazine.

In the last 3 years, except for her column, she has focused only on literary writing.

She is currently writing her second novel.

Vered Scnabel lives in Ramat Hashaon, is married to Yaron and mother to Yoav, Edo & Naomi. 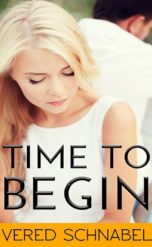