PhD. in Research on Emotions

2003 – 2008: doctoral studies in Research on Emotions at the Interdisciplinary Center, Haifa University. Doctoral thesis on ‘The Role of Emotions in the life of Religious Jews According to Notable Philosophers of the Middle Ages’, under the tutelage of Prof. Aharon Ben-Ze’ev and Prof. Menachem Kellner.

In 2010 Dr. Shlomo Yishai was appointed head of the program for training directors at Herzog College.

As of 2006 Dr. Shlomo Yishai has been lecturing and conducting workshops at the preparatory institute for Air Force personnel. In 2011 he was instrumental in establishing the Air Force Academy for Senior Officers in his capacity as head of the team dealing with ideological development. After presenting his development rationale to the Academy commander, Dr. Yishai was asked to implement these principles throughout the entire academy. Consequently he headed the team responsible for formulating the Academy’s leadership rationale in conjunction with Academy commander Lieutenant-Colonol Golan Ya’ir and his staff. After tailoring the rationale to the Air Force’s unique requirements, the rationale led by Dr. Yishai served as the basis for the development of the Air Force’s Academy for Senior Officers.

Dr. Shlomo Yishai has over twenty years of experience in lecturing and conducting workshops at academic and professional conventions, in companies and in the educational system.

Dr. Yishai is an expert in the field of Research on Emotions. He deals with analyzing organizational processes and developing leadership outlines specifically tailored to the unique character of each company, institute and organization.

A new era is dawning. Within less than two decades a fundamental change has taken place in our lives. Humanity, which has so far existed in one defined world, now exists simultaneously in both a real and a virtual world. We have developed a parallel universe, one that exists, is significant, powerful and even threatening. We are all present in that world, and it has practical implications for all aspects of our lives.

This book deals with the Era of the Global Individual. It describes the Global Person’s formation process and addresses the ideological, educational and leadership challenges stemming from this new reality while offering practical tools for contending with them. These tools are based on innovative research dealing with the crossroads between research on emotions and technology, and the wisdom we have acquired through the ages.

Dr. Shlomo Yishai, who deals with the Research of Emotions, focuses on the changes humanity is undergoing in the Era of the Global Person and presents practical coping tools that each and every one of us needs to deal with this new age. In his book, Dr. Yishai emphasizes the importance of emotions for leaders who are facing this changing reality. The question of appropriate leadership in this era is complex, and Dr. Yishai presents important tools for developing such leadership. Highly recommended.

Dr. Shlomo Yishai is an experienced educator and a scholar of Jewish Thought in the Middle Ages and modern times. In this fascinating book he deals successfully with the challenges facing people growing up in a world that has become global before their very eyes. The book focuses specifically on the challenge of leadership in the Global World and presents practical models of coping, which Dr. Yishai developed in civilian and military institutes.

Dr. Shlomo Yishai was involved in the establishment of the Air Force Academy for Senior Officers. The great interest, learning and development we gained from meeting with him led us to adopt the method he developed as the basis for the Academy’s educational rationale. There is no doubt that the Academy’s success stems from the quality and tailoring of his method, which has empowered the leadership abilities of the Air Force commanders.

The practical models described in the book – the Human Trio and the Key to Leadership –provide everyone with the opportunity to enhance the results of their actions in the face of the new era in which we live in, and herein lies their importance”. 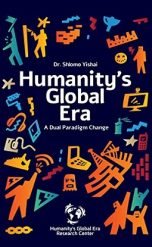