Dr. Yair Apter is a clinical social worker with years of experience. His work with rehabilitating violent men began during the third year of his degree, when he took a professional development position at a prison. Despite his apprehension, Dr. Apter discovered meaning and complexities in his work, learning to understand, help, and sometimes even empathize with his patients. This led him onto his professional course and since then, for over twenty-five years he has led private and group therapy sessions to help rehabilitate men who have expressed violent domestic behavior.

In addition to his clinical work with patients, Dr. Apter is a professor of gender studies in Bar-Ilan university and runs the Naamat fatherhood center in Israel. This book was born out of his desire to give a voice to the other side of the equation and reveal the psychological, social, and mental complexities of the minds of violent men. 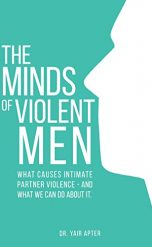