Dr. Jacobson was born in Beer Sheva, and now lives in Elazar in Gush Etzion. He is married, a father of six and grandfather of 16.

Dr. Jacobson has worked in diverse occupations: he has been a mechanical engineer in high-tech industries, a diplomat (Israel’s Consul in Boston), an investment banker (head of Mergers & Acquisitions at Leumi Bank), a Business Management lecturer at Johns Hopkins University, a researcher at University of Graz in Austria, and a lecturer on innovations and business at the Galilee Institute.

Dr. Jacobson holds a PhD from the Hebrew University in Economics History and also holds degrees in Mechanical Engineering and Finance from Ben Gurion University.

His published works include: A Jew on the Camino (Amazon, 2018); Adoption of Innovations as a Driving Force in History (Resling, 2013). 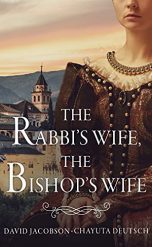