Daniel Silberman is a culturally diverse author, fluent in Spanish, English and Hebrew, born in Santiago, Chile in 1967.

In 1973 Chile went through a violent coup d’estate, and his father, David Silberman, was imprisioned and later on murdered by secret police agents and became a “desaparecido” (missing person).

At the age of 10, after losing hope of ever finding David, the family left for Israel, Daniel with his mother and two siblings, due to political persecution they were subjected to. They arrived to Israel on his exact birthday, February 24th, 1977 (back then the flight from South America to Israel, was a long 2 day journey).

Since, writing has always been his escape, as he searched for a saner, more humane world.

Daniel holds a B.A. in Journalism but worked in the profession for a short period of time, as he became extremely dissapointed to find out “what really motivates the press” (money and advertising, and pleasing the advertisers, definetely not the search for thruth).

In 1996 Daniel, with his wife and first newborn, relocated to Boston, Mass. where he worked as a financial advisor.

In 2000, he published his first novel, “Hamorad” (Hebrew for Downhill), a semi-autobiographical existential novel.

He moved back to Israel In 2008 with his family and shortly after, published “Three Monkey Brothers”, his first children’s book, both in English and Hebrew.

In 2016 “Chicken or Fish?” a short story he authored, won the first prize in the annual B’nai B’rith Chile writing competition.

His third book -The Dead Hand – La Manita Muerta – has been published in 2020 in English and Hebrew and is available on Amazon.

Currently, Daniel is writing both a movie script and a play, both based on his personal life experience,

During his entire career, both in Israel and the U.S, he has always worked and volunteered with children, in the media, and in the fields of education and literacy.

Today he co-owns a company specializing in safe driving workshops. The workshops are available in Hebrew, Arabic, English, Portuguese & Spanish. 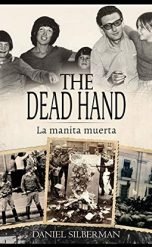