Dalia was born is Israel, she is the 9th generation of a family of the old Israelite settlement and the founders of the Jewish state. She is married to Eli, a business man and a mother of 3 children.

Dalia has recently established a luxury compound with deluxe rooms for hourly rental for intimacy purposes. This compound was her inspiration for writing the book.

Dalia is a business woman, the owner of "Hamsa", which imports jewelry and fashion from the Far East and markets them in dozens of stores. She also owns 4 private stores where she sells her product exclusively.

After her military service, she got married and became a journalist and wrote a weekly gossip column. She was the spokeswoman and PR of the Beer -Sheva City Theater, near to where she lives.

After she left public service, she began her career as a business woman and importer. 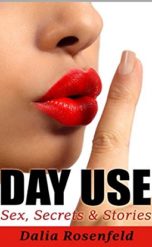