Doron Darmon was born in Israel in December 1962. He is the youngest of 3 children to a family who ran away to Israel from the war for independence of Algeria in the 60’s.

His parents in their childhood, like the rest of the Jews in France in the 40’s, were persecuted by the French collaborators and the Nazis and were about to be deported to concentration camps in North Africa when they were rescued at the last minute by the allied forces.

Doron grew up in Kibbutz Regavim in the center of Israel. At the age of 24, he left Israel and traveled for three years in Europe and Africa, returning to Israel in 1987. Soon after his return, Doron got married and brought 5 children into the world, and educated them to be the very best at what they love to do and to follow their dreams. Doron Studied at Ben Gurion University, where he received a B.Sc & M.Sc in Computer & Electrical Engineering. Later on, he became a personal triathlon coach and personal trainer. He participated in several Ironman competitions and ultramarathon races, events that gave him a new perspective on life, achieving goals, and coping with challenges. He is the father of an Olympian athlete who competed in the 2016 Rio De Janeiro Olympic triathlon.

His first novel, “The Parisian Dancer", is based on the true story of Marcel Ladenhiem and tells the story of a cabaret dancer who helped two brothers to survive the Holocaust in Paris in the Second World War. Today he writes books and serves as a cyber expert in the Israeli Cyber National Directive. He continues to coach people to achieve their goals and follow their dreams. 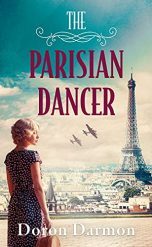