David “Indio” Keidar was born in one of Baron Hirsch's Jewish colonies in Argentina. He made Aliya in 1960, and is a member of Kibutz Nir Am.

His first book "Colonia Villa" was published by Sifriyat Hapoalim Publishing in 1989. “The Girl on the Tracks”, originally published in Hebrew as "My Aunt Tatiana", was first published in 1994. 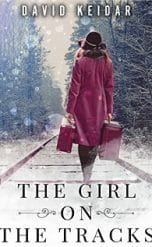