H.A. Honza is the pen name of Avshalom Holzberg, an Israeli writer who grew up on a kibbutz, the son of Holocaust survivors. As an adult, he served in the Israeli army, experienced combat, and was seriously wounded. After rehabilitation, Avshalom married Simcha Holzberg, an artisan and businesswoman, and started a family. He is the father of four daughters and also a grandfather. Avshalom currently dedicates himself to writing, is a member of the Hebrew Writers’ Association and the Sharon Herzliya Rotary Club, and volunteers in various capacities.

Avshalom has a highly developed social consciousness, and his writing conveys his unique perspective to the reader directly and unsparingly. The inspiration for his books, as well as their central motifs, stems from various events in his life. His first book, And Clear Skies Above, depicts the array of torments suffered by a special needs child in his interactions with the children around him, based on Avshalom’s own experience as the older brother of a special needs child who passed away several years ago. This is a very human book – honest, compassionate, and critical – that reflects the author’s love for people and particularly for his brother. His second book, Spirit Upon the Abyss, describes in an innovative manner – beyond time, location, or the cessation of life – the horrors of death on the battlefield. With their unique, intense style, Avshalom’s books portray human experiences shared universally by all people, in all eras, throughout the world. 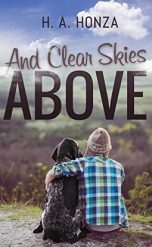