Efraim Yitshak Pedatsur (Efri) is the first born son of Holocaust survivor Yaakov Kotowski Pedatsur. Efri was born in Israel in 1948, just a few months after the declaration of independence of The State of Israel.

He holds a B.A. in International Relations and Political Silences from the Hebrew University of Jerusalem.

In 1978 he moved to London and started his business life, first as an independent contractor and later as a Project Manager for a London based International Trading & Investment company that had activities mainly in Eastern Europe and West Africa.

He is married and has two daughters and two granddaughters who live in Israel. He retired in 2016 and currently lives in London. 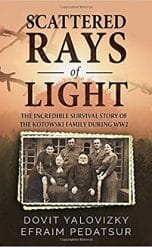