Andy started in the workforce when he was fifteen. He began his work career at Georgia State University writing SPSS code for government-sponsored projects. Upon graduating High School, he proceeded to continue studies in Computer Science, Statistics, and Political Science at Georgia State University and Data Science at M.I.T. In 1986, he built the first Local Area Network on campus at GSU for The Center for Public and Urban Research.

In 1989, Ted Turner hired him as the System Specialist/Project Manager to create an electronic inventory system to prevent overbooking. The rest is history. For the next 20 years, Andy continued his career at Turner Broadcasting. In 2006 he moved to The Weather Channel. He was at the Weather Channel for over eight years. During those years, he was responsible for the complete overhaul of the infrastructure that ran the website (www.weather.com). Also, he and his team made history by creating the first weather iPhone and Android applications for a generation on those now culture-changing devices.

His focus now is being the BEST father he can be for his daughter (Daddy's little girl), and writing about his lifelong journey with CF, not knowing he had it. 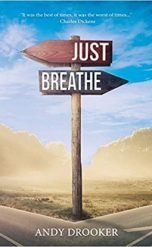