Dr. Amnon Hever is married to Rachel and has four sons – Uri, Ze’evi, Ron, and Gal, who have made him and his wife grandparents.

He is a member of the New Sanhedrin, former General Manager and one of its founders.

For most of his life, he worked as an educator in various frameworks in Israel and abroad and was awarded the Jerusalem Prize for Jewish Education for his work.

He was the head of the Jewish History department at Orot College in Israel and managed the Alabama Birmingham University’s Israeli branch for second degrees in educational consulting and educational leadership.

Amnon has written a series of books called The Symphony of Your Home, about building a relationship and a home on the foundations of Jewish wisdom. These books are available for sale on Amazon. 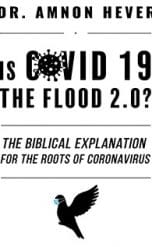