A.D. Erving (Amir Doron) was born in August 1974, and has been a basketball fan his whole life. After playing four years of professional basketball overseas, Erving went on to coach the game for nine years, working with children and teenagers both on and off the court. Although he grew up a diehard Philadelphia 76ers fan, Erving's allegiance has shifted in recent years to individual players who he admires. Some of his current favorites include Dirk Nowitzki, Steve Nash, Paul Pierce, and – of course – Stephen Curry. His absolute favorite player of all time, though, is Julius "Dr. J" Erving, who played for the 76ers. When A.D. Erving was seven years old, he met Dr. J in-person, and a picture of the two of them was published in the local paper. This encounter with his basketball idol is one of Erving's all-time favorite memories.

Now in his thirties, A.D. Erving works as a content producer and businessman, in addition to his job as a children's author. He enjoys writing and answering trivia questions, and even used to work as trivia writer for TV shows. In his spare time, he loves jogging, reading, watching basketball, and spending time with his wife and kids, who are six and two-and-a-half years old 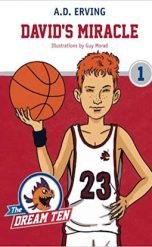