Elia made her literary debut with her first collection of short stories called "Other Landscapes" (Steimatzky, 2016). Her second book, "Pasta for Two", was first published in 2020. Her writing investigates the inner world of the heroes and their unique reactions to events they had to encounter such as immigration, grief, and financial difficulties.

She is currently finishing her third dystopian book, "The Good Night Ceremony” and a long novella called "What We Have Inherited". 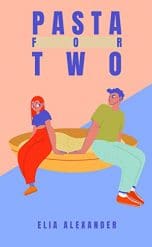