Journalist and former tour guide, Alona Golan Sadan, was recently diagnosed with Parkinson's disease, which does not prevent her from continuing to write and travel the world.

Born and raised in Israel, she is what is known as an Israeli "sabra" – cactus fruit – a 1940s nickname for native-born Israelis, indicating that they are thorny on the outside, but sweet and soft inside.

After years of a journalistic career that dealt mainly with culture, art, and interviews with artists, theater people, painters, musicians, and others with fascinating stories, she became editor of an Israeli newspaper and later managed a cable television production department in Israel's south. During these years she combined her first marriage and the birth and the raising of her two sons (thanks to whom she is today a grandmother) with her hobby of guiding tours in Europe and Thailand.

Twenty-four years ago she decided to stop managing the world and to begin a second relationship with a man whom she met thanks to her writing talent. She wrote an article, he responded in a letter, and the rest is history… Alona's writing is characterized by humor – sometimes subtle, sometimes wild – and her love for word games and finessing language.

Her first novel, Empty Envelopes was published in 2012, and the second, Parkinson's? You Must Be Joking… (2017) has become a great success among those diagnosed with Parkinson's disease, their families, and friends. She has appeared with her book on several television programs in Israel and at lectures and support meetings with many groups of Parkinson's patients. 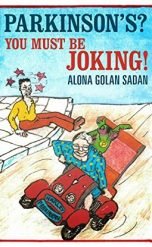