Alon Amir is the biggest bad-ass you'll ever meet! He may be 40 years old, and at times acts that way, but inside he is a 16-year-old boy.

Nobody understands how he has managed to own a successful PR and management company for singers and song writers, and even worse, is allowed to lead the PR campaigns for countries that are taking part in the Eurovision song contest. The world has gone mad!

With his unique voice (he's gay and sounds like a woman) and personality, his dark sense of humor, and – some might say – his smarts and astuteness, Alon expresses in his book what we all think, but don't dare to say out loud!

Alon has worked with some of the leading singers and performers in Israel, helping them to build a career and an audience. He created several TV segments with his twin brother on Israeli TV and has written for several newspapers and leading web sites. He also has had his own radio show (despite his voice).

Is the world ready to accept Alon as he is? He doesn't care. You may like him or dislike him, but one thing is for sure – Alon will make you laugh until you pee in your pants.

Alon Amir took part in many Eurovision competitions. He served as the Head of the Press for the Israeli delegation (2009, 2012, 2013, and 2016) as well as for the Slovak (2011) and Belarussian delegations (2005). In addition, he served as an international juror numerous times in national finals in Sweden, Malta, Estonia, Bulgaria, Norway and Finland. 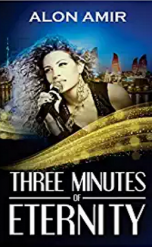