Olokita’s first book (in Hebrew) – “Ten simple Rules”, was published in 2014. It won an Israeli literary prize and immediately became an online bestseller. The following year, another book by Olokita – “Reasons to Kill God”, became a local bestseller. In May 2016, his third novel – “A Wicked Girl”, was published and was considered to be a great success.

I.V. Olokita is a happily married father of two and a foster father of five cats and two dogs.

He considers sleeping as a waste of time and spends his night writing. 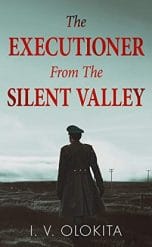