Oskar Marrano is the pen name of Dr. Ilan Hazout, born in Jerusalem into a family that has dwelled in this city for over four centuries. His parents, who grew up under the British rule in Palestine, were multilingual, each one fluent in five or six languages, including Ladino (Judeo-Spanish, the Sephardic equivalent of Yiddish), Hebrew, Arabic, English and French.

The author spent most of his adult life abroad. After travelling extensively around the world to countries in Asia, Latin America and North America, he began his academic studies in Israel and continued in Germany, France and, ultimately, in the United States, where he obtained a PhD in the area of Theoretical Linguistics. He then moved on to work in research and teaching at academic institutions in Canada, Israel, and South Korea. Today, he lives in Haifa, Israel. 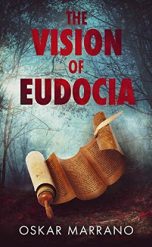