Ilan Arad was born and raised on a kibbutz near the northern Israeli border with Lebanon. After serving as a commanding officer in the Israeli Defense Forces’ Paratroopers Brigade, he went on to volunteer as an operational helicopter pilot in an air force special rescue squadron for many years. He then went on to become the Israeli Defense Forces’ Air Force’s spokesperson. Following his release after Operation Desert Storm, as a major, he opened his own helicopter company in the airport of Herzliya. The company also provides helicopter flying lessons. Excelling particularly in freestyle, Ilan swam for his kibbutz swim team in his youth. Divorced, and a father of two, he spends his downtime playing ragtime on the piano and is currently hard at work on his second novel. 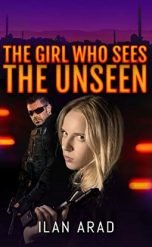