Marek was born in Lvov in 1927. Following the German occupation of the city, and thanks to his Aryan appearance, was able to flee to Italy aided by Italian soldiers.

In September 1943, when Italy surrendered, he was captured by the Germans. He escaped, joined the partisans, and then became a member of an American OSS (Office of Strategic Services) unit.

In 1948, during the Israel War of Independence, Marek joined the Eighth Battalion of the Negev Brigade. He was an instructor and platoon sergeant in the IDF and, after completing the combat sergeants' course, became a platoon commander in the 52nd Battalion of the Givati Brigade.

Marek was a Member of Kibbutz Lohamei Hageta'ot, where he lived until his death in November 2019.

He served as secretary of the economy and coordinator of Aliyah of the Kibbutz.

His book Survivor's Journey From the Alps to the Red Sea, is an autobiography. 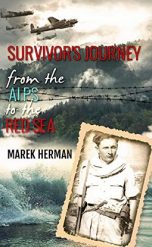