Orgad Wardimon's family settled in Israel in the years when the American nation was fighting for its freedom 1977-1978). His birth in 1939 on the eve of World War II and his childhood in the days of Israel's battle for independence were important milestones in his life and paved the way to his later achievements. As a young boy, his fight for survival could be read as representing that of his young country.

As he grew older in the shadow of Israel's wars, he realized the importance of peace. And so, parallel to his reserve duties in the IDF, he produced the musical "Hair" in Israel in the days of a long and vicious war, managed business corporations and later wrote and published his insights on life in poetry and prose.

He has produced plays and movies, and managed theatres as a pioneer – branding his movies and his struggle for the welfare of the movie industry and theatregoers in Israel.

Wardimon, known for his achievements in the Israeli film industry – Films, images, their heroes and the movie theatres of his childhood are important milestones in his life's journey. The memories from his childhood in Tel Aviv – his country's great wars, and his own little ones – feature in his books, poems, and manuscripts. 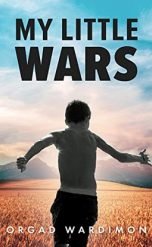